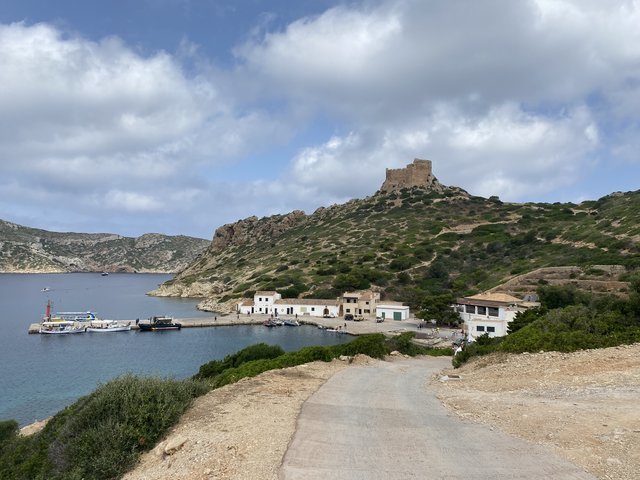 Excursions to Cabrera island in Mallorca

The national park of Cabrera has been visited by all the great civilizations of the Mediterranean: Phoenicians, Carthaginians, Romans, Byzantines ... because of its strategic position and its beauty, now with us you will have the opportunity to discover Cabrera and its islands with one of our excursions.  Also, all our boat trips include the visit to the Blue Cave / Sa Cova Blava, one of the main attractions of Cabrera, where we will arrive by boat, so you can experience unique sensations while swimming in its blue waters.

The best excursions and tours from Excursions to Cabrera

Find what you are looking for:

There are no results

An excursion to Cabrera is one of the most popular activities in Mallorca in the summer. There are many attractions that the archipelago of Cabrera offers, such as its beaches, the views from its Castle, its hiking trails ... This, together with the pleasure of doing a boat trip, and ending with a bath in the blue cave, are some of the the reasons for its popularity. Without forgetting that the archipelago of Cabrera is the only national park that we have in the Balearics.

What to do on your Cabrera excursion:

Whether you are visiting in summer or winter, Cabrera has a lot to offer. The summer months are ideal to enjoy Cabrera’s great climate and the sunshine on one of its beaches. Thanks to the level of protection that Cabrera enjoys as a national park, its waters are crystal clear and are a pleasure to swim in. It’s also a good place for snorkelling as there is a great variety of marine fauna.

In autumn, it is ideal to make a hiking excursion in Cabrera as there are many different routes to follow, allowing you to really get to know the island. At the information office at the park they offer a detailed explanation of the different possibilities and all the routes are well marked.

All this without forgetting other interesting activities to do on Cabrera, such as a visit to the castle, the museum of Cabrera or the French monument.

The Blue Cave at Cabrera

The archipelago of Cabrera is formed by 18 islands, many of which are little-known, unlike the Cova Blava (the Blue Cave). This is a natural cavity where, in the afternoon, the sun’s rays illuminate the cave, producing spectacular light effects and colours, hence its name. The only way to reach this cave is by sea and all the excursions to Cabrera include a stop there.

Since 2014 the national park of Cabrera has offered accommodation at a hostel for a capacity of 24 persons who which to stay the night on the island. The hostel occupies one of the buildings which was once part of the Cabrera military base.

The prices to stay at the hostel are around 60€ per night in high season and 50€ in low season and it is open between April and October.

How to go to Cabrera:

The only way to reach Cabrera is by boat, whether that is on one of the organised excursions or with you own boat or a rented one. You must have a permit to take your boat to the national park. The excursions departing from Colonia de Sant Jordi are the most popular way to visit the island either by speedboat or pleasure boat and there are different options, the most recommendable being the six-hour excursion, which gives you time to enjoy the island and a swim stop at the Blue Cave.

Timetable of the Cabrera excursions

The timetables of the tours to Cabrera vary depending on the time of year, the most common departure time being at 11am.

When you select one of the tours above, you can see the different timetables available and the duration of each excursion, so you can plan well your time in Cabrera.

Opinions of the Cabrera Tours:

Sincerely one of the most recommendable excursions… you must do it at least once in your lifetime… we are already getting ready for the second!

A perfect day in Cabrera, service and crew excellent. Looking forward to going again next year, would recommend it 100%.

A 10. Boarding was excellent, the service impeccable and the location marvellous. The set menu is recommendable too, homemade and good quality. Without a doubt I’ll be repeating.