There are many possibilities to explore the countries of the world, culinary is one of the ways. In this article our experts prepared for you the list of the most popular food dishes around Spain. Have a look what is the most famous in Canary or Balearic Islands, or cities like Barcelona and Madrid. Get inspired, because many of those delicious dishes you can prepare at home! Enjoy your meal! Pa amb oli is one of the most popular dishes, which are a must to try during your holidays in Mallorca.  You can find them as a starter in restaurants or as a breakfast idea. The meaning of the name is “bread with oil”. It is prepared from brown bread with garlic, local “ramallet” tomatoes and olive oil. Normally served with local grown olives. You can find many variations of additions to pa amb oli, as on the picture below by @piafmajorque on Instagram. If you are coming to Mallorca and looking for foodie experience, you can check the possibilities on our website. In the capital of Spain we recommend you to try the calamar (squid) sandwich. You can find it in restaurants, but also as a street food during sightseeing of the city – Plaza Mayor (pic by @madridlowcost on Instagram). Squid is battered in flour and fried in olive oil. In restaurants you can also find the version with extra tomatoe sauce or alioli.

If you would like to bring a taste of Madrid to your home, you can follow the tutorial below: 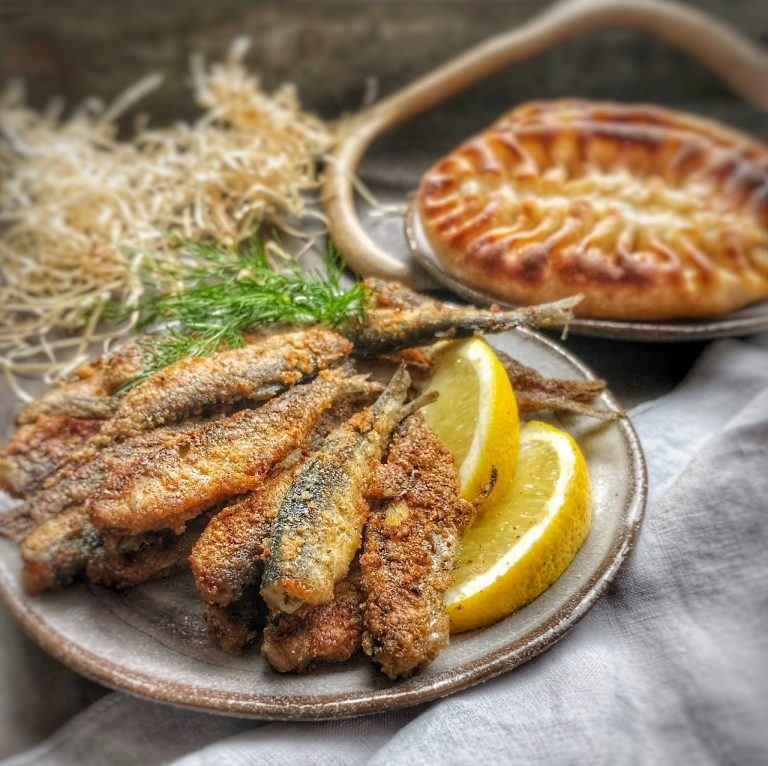 The next recommended dish is typicall for Andalusia and can be translated as fried little fish. The fish is coated in flour and fried in olive oil. Depends on the restaurant it can be a starter or a main course. Normally served with fresh lemon. For sure a must to try for all fish foodie fans. Empanadas are very popular around Spain and really something worth to try during the sightseeing.  The dough can be filled with meat, cheese, corn, seafood or other ingredients. You can find both baked and fried versions.  They are recommended as a snack. If you want to know more about them, have a look on the video below.

Now is the time to move across the ocean to Canary Islands, beautiful part of Spain with the variety of local dishes. One of the most popular is called Papas arrugadas, which can be translated like “wrinkly potatoes”. Very simple potatoes dish, which can be served alone or as addition to meat dishes. In many restaurant, when served alone is combined with a chili pepper garlic sauce. It is prepared from small new potatoes boiled in salt water. Papas arrugadas can be found everywhere and are impossible to miss. If you are planning to visit Canary Islands you can totally put it on your bucket list.

This dish you can also prepared easly at home, check the tutorial below:

Our next speciality takes us back to Balearic Islands, this time to beautiful Menorca. Here we would like to recommend you to try local famous lobster stew named calderita langosta. It is prepared on the base of sofrito – souce very popular in spanish and Portuguese kitchen. Then boiled with vegetables like onions, tomatoes, garlic and parsley and of course the main part – Lobster. Normally served with bread. Important to remember that the season for lobster stew is only during spring and summer. The last place on our list is Barcelona. Here we would like to recommend you the dish called Escudella ( pic by @lescloses on Instagram) , which is a traditional Catalan meat and vegetable stew and soup. We can divide it in two parts during serving. The first one – soup – consisting of a broth with pasta, rice or both. And the second one called
carn d’olla, which consists the meat and vegetables from the broth.

Escudella is one of the main dished during Christmas celebration in Barcelona and the region, and it is named “escudella de Nadal” – Christmas soup.

This dish takes a quite long time to cook but the result is delicious. You can served also with warm red wine and warm bread. Below you can also find the cooking tutorial how to prepare this yummy soup by yourself. Enjoy!

Hope you enjoyed the article and found some new culinary inspiration. Have you tried some of those spanish specialities? Share your comments with us below.