Formentor is one of the most visited areas of Mallorca. Today our experts are on their way to explore this part of the north of the island and show you the best of it. There is many interesting things you can see and visit when you explore Cap Formentor, so enjoy this article and get inspired to visit one of the most important places in Mallorca.

This 9 km long road, which takes us to the Formentor hotel, was built in the 1930s by engineer A. Parietti Coll, who is one of the most famous on the island, and among other roads he also built the Calobra. The road was made to supply what was necessary to the hotel when it was under construction, because until then it could only be reached by sea.

At certain points it was so risky to continue that Alan Diehl himself (owner of the hotel at the time), hung on a rope and was placing the holes to encourage the workers. It is a wonderful engineering work, drawing curves to save the slope, and using rock extracted from some of the cliffs in other places of the road.

The best viewpoint in Formentor

The viewpoint of the Colomer is the highest point of the road, located 232 meters high, and is a place that is full of people, cars and coaches most of the time. It was built in 1961. We see a 1968 monument rock in memory of the engineer Parietti.

It is also known as Cala Pi de la Posada. A beautiful one kilometer long sandy beach WITHOUT URBANIZING. It presents a perfect curve, one of the purest in the Mediterranean, with beautiful background of pine trees and dense oak. It is a beach very frequented by the boats that anchor at the summer months.

Formentor beach is the pole of attraction for thousands of visitors in the hot season. At the beach you can find families, famous people, politics, sometimes it is called Millionaire Beach. The area near the hotel is more frequented by the clients of the exclusive establishment. On the beach there is no lack of traditional beach bars, as well as showers, sun loungers, umbrellas, sea veils, and even a surf school.

The road to the lighthouse of Formentor

Possibly these ten kilometers that separate the hotel from the lighthouse are one of the less traveled and less known sections, but no less beautiful.

At first the road runs through forests, we pass the houses of Formentor and later those of Cala Murta, where the tribute and memory of Costa i Llobera is permanent. Then we have the stunning views over Cala Figuera and we continue through a tunnel. After several turns we get to the lighthouse building. From there, the show, with the superb cliff and the outer sea, is overwhelming. Well, most of these words are from Josep Pla expressing that the traveler should not conclude his way in the Formentor hotel, but in the lighthouse.

The engineer Mariano Pascual was the promoter and the director of the works of this road that began to work in 1951. This road replaced the old road from which remains are still preserved, and it is possible to travel it for the most part.

The lighthouse of Cap Formentor

The engineer Emili Pou was the promoter and director of the works of the lighthouse that began in 1860 and ended in 1863, its cost were 1.3 million reais, a figure higher than what a lighthouses usually cost, probably because there was no road in conditions at the beginning of its construction, and the materials had to be transported by sea.

Currently in the lighthouse there is a bar, a small parking and some viewpoints with magnificent views. The Cap de Formentor has one of the most emblematic lighthouses and the main reference if it is reached from the northeast-north. It is located on 159 meters. The view is wonderful, and if the day accompanies you can see the island of Menorca on the horizon. The supply of the lighthouse is 36 miles.

How to visit Formentor?

Even Balearic Government has reduced vehicle traffic in the area during the summer season, the Formentor can be visited in different ways. You have the option of renting a car, organized excursions and even by boat. Check on our list here and choose, which is the most suitable option for you: 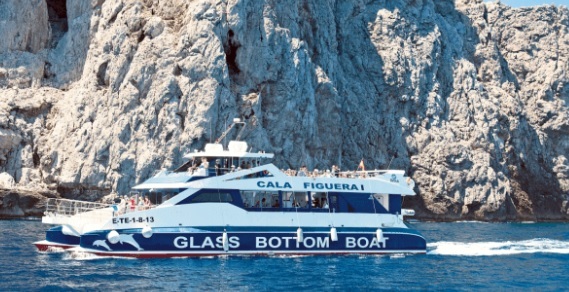 Are you ready to visit the Cap Formentor with us? Great! If you have any questions, please leave us a comment or find more excursions by clicking on our logo.